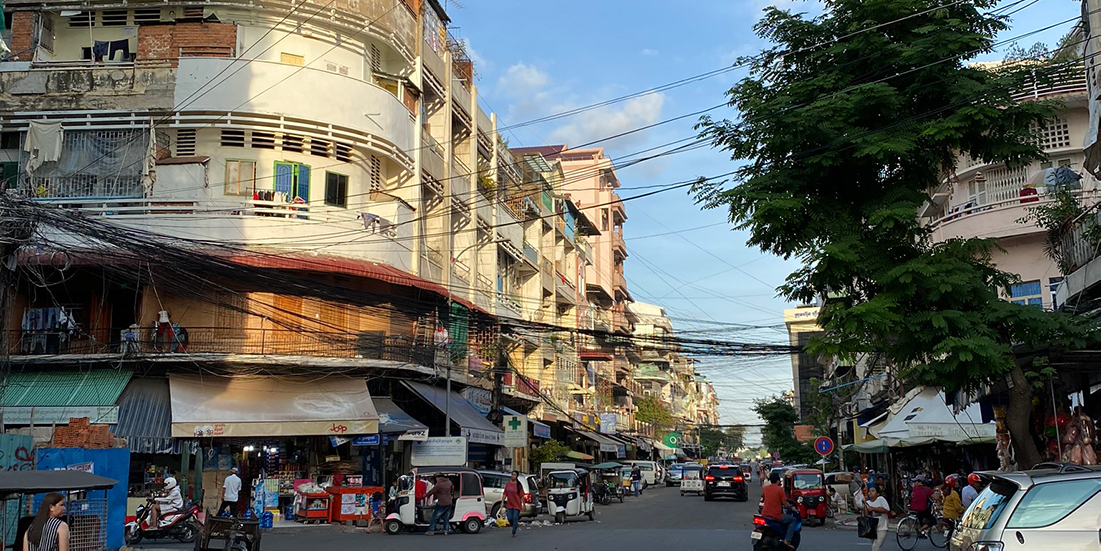 Phnom Penh and the surrounding Kandal region recently introduced the first formalised public bus system of modern Cambodia.  However, the public bus struggles to attract passengers, as the other transport modes are not well integrated so far and the buses are stuck in congestion. SMMR supports its partners on transport service governance and legislation and helps piloting data-driven planning.

Sustainable Design of Urban Mobility in the Metropolitan Region

In the last decade, the urbanisation of Phnom Penh grew beyond the administrative limits of Phnom Penh City, extending into the surrounding province of Kandal. Today, Kandal’s capital Ta Khmau seamlessly integrates into the Phnom Penh built-up area. Around 60% of its workforce commute daily to Phnom Penh for employment. In new satellite towns in the north and west of Phnom Penh, similar developments are anticipated. With rising population, traffic volumes grow, particularly in Phnom Penh’s south, where additional housing for 0.5 million people and the new airport are built.

In the metropolitan region, motorcycles account for more than 80% of vehicle traffic. Public transport covers less than 1% of the trip volume. Longer trip distances and growing wealth are likely to lead to more car ownership and traffic, resulting in severe parking shortage and in traffic gridlock.
In the metropolitan region, national and provincial level stakeholders share responsibility for transport governance. Within urbanised areas, national roads are managed by the Departments of Public Works and Transport (DPWT). The DPWTs are under the shared authority of the Ministry of Public Works and Transport (MPWT) and the respective province. The recently inaugurated Phnom Penh traffic control centre is under the authority of the Phnom Penh DPWT and the National Police (Ministry of Interior).

MPWT is the national regulator of all transport services, such as the interurban bus network and taxi services (limousines, “remorques” and tuk-tuk). E-hailing services, such as Grab, PassApp and several others, also exercise a determining role by setting standard fares. Interurban services are provided by private companies, who also decide the routes and frequencies.

By mandate, the sub-national level is responsible for public services, including the management of urban transport services. The Phnom Penh City Bus is operated by City Bus Authority (CBA), an agency under the control of Phnom Penh Capital Authority (PPCA). Two routes extend outside Phnom Penh city into Kandal Province for short distances. The CBA also operates a river bus from Phnom Penh to Ta Khmau. The national government contributes to the coverage of the operational deficits of the services by PPCA.

The lack of integration hampers the modal-shift to public transport in Phnom Penh. Thus, SMMR supports the Cambodian authorities with to collect data on the interurban bus network and to develop a public transport law to comprehensively govern transport services, i.e. by a transport executive and facilitate a modal shift.

Phnom Penh has been the frontrunner of ITS in Cambodia. Equipped with cameras, many traffic lights are interconnected and the modern Traffic Control Centre enables real-time steering of traffic flows. Kandal Province has proposed the establishment of a traffic control centre for Ta Khmau.

The SMMR project supports the Cambodian authorities to improve the traffic flow and air quality by piloting such machine learning analysis of traffic, which can feed evidence-based planning, i.e. a Sustainable Urban Mobility Plan (SUMP). It further supports MPWT to frame the Cambodian ITS strategy.

Scroll back to top